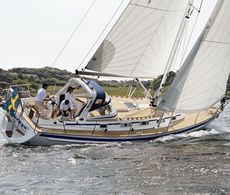 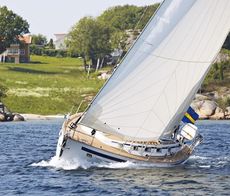 MALÖ 37
Malö 37 equals tradition and evolution packaged in a nice neat package. “A thrilling boat, which meets our demands on comfort, stability and the ease in handling” as quoted by Johan Hilmersson, Managing Director at Malö Yachts.

Malö 37 is the successor of the very popular Malö 36 and offers amongst other improvements a further focus on sailing qualities. The key factor to further improved stability is its beam, which in turn enables larger sail area. This in combination with a longer waterline generates higher speed; in particular in light winds. Added length and width also enables improved standing height, larger berths and many easily accessible stowage areas.

The design and construction is as is the case with the previous boats done by Ängermarks design team. The goal has been to develop a convenient, stabile, light and easy-handled boat.

The Malö 37 will with it’s moderate draught easily manoeuvre in a narrow archipelago! The Malö 37 will be equipped with the traditional targa arch, timeless lines and an of course an aft cockpit. The ambition was “More of everything”, which can attract a wider segment but with the excellent QUALITY INTACT. A boat that enables “racing” as well as cruising! The New Malö will, as previously, be available with three different sterns; negative, negative with an integrated bathing platform and Classic. Interior-wise, the Malö 37 will produce a sense of space. Improved headroom, brighter cabin, larger cabin sole, wider berths, improved stowage capacity and more space at the navigational area. The Malö 37 is a boat that spells comfort!

The first boat will be launched in June of 2006. After testing, calibrating and final adjustments, this first boat will be exhibited on our Open Yard on August 25-27th. But already on Boat 2006 in Düsseldorf it will be possible to get a feel for the boat through 3D pictures on the exterior and also interior. Please visit the sales staff for an impressive demonstration on how the boat will look! 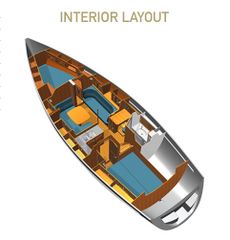 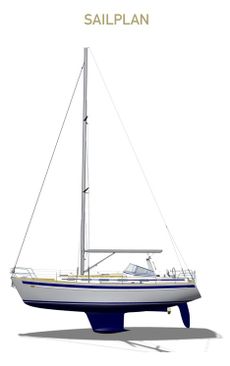 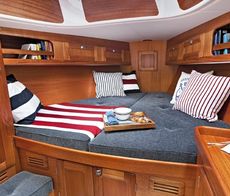 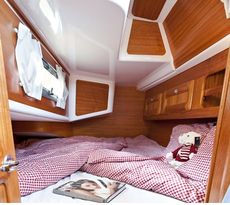 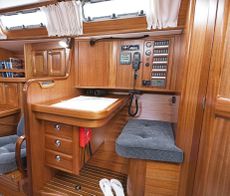 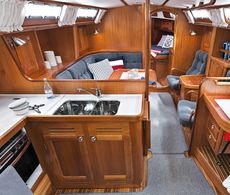 For the classic yacht aficionado, Malö offers, as an alternativ to the standard Malö 37, 40, 43 and 47FT models, a handsome reverse sheer transom, which offers extra deck and locker space. 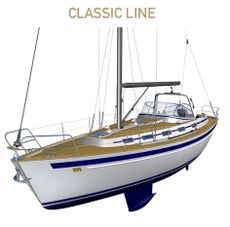 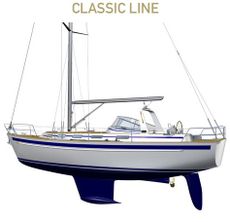 When we talk to "ordinary" yachtsmen, we frequently notice that it is very easy to misunderstand the meaning of the usually published stability curve that indicates the righting lever ( G-Z ). This curve alone is no measure of a yacht´s real stability.

To illustrate this statement we have prepared stability data for three different boats, and it is very common that the G-Z curves ar interpreted as indicating that all 3 yachts have roughly the same capacity to resist a capsize. In fact it is the curve of righting moment that illustrates this capacity. Every wave contains a certain amount of energy en every vessel requires a certain amount of energy to be turned over. The energy required to capsize a ship is represented by the area of curve above the baseline, and energy needed to return it to an upright position is represented by the the area below the baseline. NOTE: This is only valid for the curve represrenting the righting moment, NOT the G-Z kurve.

Thus we can see that it takes more than 4 times more energy to overturn the MALÖ 43 as the 33 footer. To return the MALÖ 43 it takes a wave containg 1/9 of the energy required to turn it over. A much better assesment of the real stability is thus to compare the curves of righting moment, and also look to the STIX number as defined in the ISO standard. It should be noted that the STIX number is heavily based on hull length, so that the larger yachts should have considerably larger STIX numbers.